At last!  My reel-to-reel recordings of Duncan are going to be digitised!

With all the boxes of tapes safely loaded in the boot and heading north to Scotland, I could feel echoes of that day, over 20 years ago that I’d first loaded those tapes into the car.  I’d taken Simon Heywood up to visit Duncan.  The day we were due to leave, Duncan had dragged out a load of boxes and bin liners from a cupboard.

All the bin liners and saggy boxes were stuffed full of open reel tapes, years’ worth of recordings of Duncan’s stories, songs and thoughts.  We loaded then into the back of my car – and it probably did look like we were going to the skip, but we felt like we were in an Indiana Jones film, rescuing a lost treasure from oblivion.  Not that we’d had to face any great trials, traps or monsters – the worst we’d had to cope with was being woken up at 6 in the morning after a late night drinking session and smoking 5 times as many cigarettes as we normally would. And, of course, we’d left the real treasure, Duncan, behind, though he had promised to come and visit.

When I first began storytelling, it was at Tales at the Edge, a fabulous, friendly storyround, set up by two stalwart storytellers, Mike Rust and Richard Walker.  I would learn one new story each time and then listen to the other storytellers. In the early days, it was often down to Mike and Richard to carry the storytelling and they would swap stories back and forth.  Richard had many strings to his bow, what is now known as a ‘portfolio career’.  He worked freelance for BBC Radio Shropshire and presented ‘The Folk Programme’ every Thursday evening.  I did my work experience with him when I was 16 – it was so good, he couldn’t get rid of me and I helped out on The Folk Programme every Thursday from then on.  The BBC were still using reel-to-reel players and I learned to edit using razor blades and sticky tape.

Duncan didn’t give me much clue as to what the tapes were, but as I poured over the boxes, it became obvious that they were tapes his wife Linda had recorded from the 1970s to 1990s. I had access to facilities at BBC Radio Shropshire when back home, but I was a student in Leeds, so I blagged some studio time in Leeds Poly music department.  It was slow going, transferring the material from reel-to-reel onto minidisc and cassette.  My first problem was that the tape kept running out in the middle of a story and I would be left hanging, desperately trying to find the end.  Linda seemed to have labelled the boxes quite thoroughly, but I couldn’t grasp her system.  Embarrassingly, it took me a whole day to realise both sides of the tape were recorded!  This was normal practise – most people recorded on both sides of a cassette, but I was used to editing everything I recorded – and if you’re going to take a blade to the tape then stick it back together in a different order, it doesn’t work if you record on both sides!

Life was busy – I was working on a full time science degree – and trying to keep up with storytelling too.  If I wanted to work on the tapes, I either had to go home and to Radio Shropshire in quiet evenings, or book studio time at Leeds Poly which I could only do out of term time.  If I had a chunk of time out of term time, then the decision was – should I work with the tapes?  Or go and see Duncan?  It wasn’t really much of a choice.  So, the majority of the tapes were left unplayed.

Time moves quickly.  When Duncan died, it was a comfort to have the store of tapes waiting for me, though it took a while to be able to listen to them.  I tried various set ups to connect my reel-to-reel player to the computer.  I copied several tapes, but then my reel-to-reel player stopped working…and there was a possibility it was because the tapes were dirty or leaving residue.  I realised I needed expert help.  I was worried that playing the tapes would worsen their condition.  They needed to be played once and recorded professionally to get the best sound quality possible.  It was going to take time and money – and I didn’t have much of either! 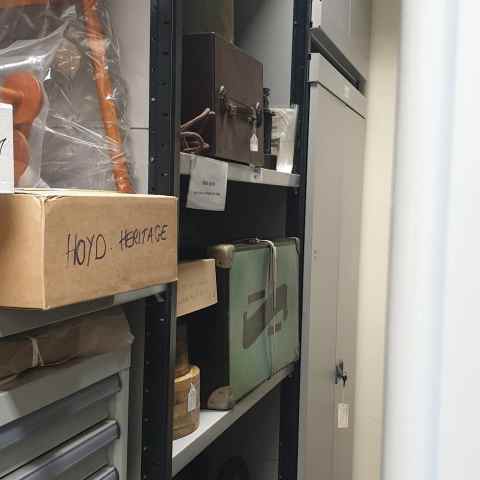 Fortunately, Bishops Castle is an amazing place with surprising resources.  We have Bishops Castle Heritage Resource Centre – a treasure house of museum pieces for the House on Crutches; first stop for advice on local history and – most importantly for me – a climate controlled, museum standard storage facility.  The tapes were stored within the archive while I applied for various bits of funding, until at last, someone suggested that they would like to help – and they were sure others would too.  Why didn’t I try crowdfunding?  It seemed like the ideal answer.

I set up a crowdfunding appeal.  It was a huge success and gave me the money I needed to digitise the tapes – thank you everyone!  It also gave me matched funding so that I could apply for Arts Council England funding, to have some time to actually listen to the tapes; think about different ways of passing on the stories and songs; have lots of conversations on and offline about Duncan, his work and why it’s important – and write this blog.  Second time around the funding bid was successful and I could at last get the tapes digitised!

It’s a funny thing.  You can push at something for years and years and it refuses to budge.  When the right time comes, things will start to move.  I’ve always kept in contact with Duncan’s family and now it was time to sort out the tapes, Linda asked for photographs of them, to work out exactly what the tapes were.

Linda came over from the States to study at The School of Scottish Studies.  It was as a postgraduate student that she made her way, walking and hitchhiking, carrying a large rucksack packed with boxes of 3.5 volt batteries, blank tapes, microphone and leads and a Uher open reel recorder over her shoulder, to the campsite where Duncan was staying and they first met.

Linda married Duncan and travelled with him, continuing to record his stories, songs and talk of Traveller life while working for her PhD on ‘Ballad singing among the Scottish Travelling People’, becoming certified ‘Rubicus Scoticus’ in 1985, then moving on to transcribing Duncan’s stories for the many books they published with Canongate, Harmony Books and Penguin.

My tapes came from her PhD work – both original recordings and copies of various tapes from the Sound Archive at The School of Scottish Studies.  As such, all the blank tape and tape recorders had been provided by The School of Scottish Studies.  Linda knew that the copyright of the tapes was divided into three, with The School, informant (Duncan) and fieldworker (Linda) all having an equal share.  This led to a dilemma…in my naivete, I hadn’t given a great deal of thought to copyright…they were recordings of Duncan and Duncan had given them to me.  Linda had recorded the tapes, but she was happy that I had them and trusted me to use them respectfully.  I had planned to digitise the tapes independently and look for a home for the physical tapes afterwards.  Having worked in harmony with The School of Scottish Studies for years, Duncan told me he disagreed with their policies and did not want the tapes going back to The School of Scottish Studies.  However, if they already owned some of the copyright that made everything tricky.  If the School held some of the copyright, then I would not be able to share the recordings publicly without consulting them. Duncan gave me the tapes to share his stories, not hide them away. If they had supplied the tape, they would be experts on how to look after that tape.  They also hold many other recordings of Duncan and it would make sense for them to be housed together.

Duncan was a big character, full of life and passionate about stories.  He had a huge heart – and if someone, or something dear to him was insulted, he would defend them tooth and claw.  Equally, he had a huge capacity for forgiveness – and listening to both sides of a story.  Duncan was known for his feuds, but also for his reconciliations.

Linda, Betsy and Tommy, Duncan’s wife and children discussed what to do and decided that while Duncan had had his ups and downs with The School of Scottish Studies, if he was here now, he would probably agree that we needed to work with The School of Scottish Studies.  The School would be the best place to get the tapes digitised, to care for the original tapes and unite them with the material already held.  I know that the most important thing to Duncan was that his family were happy and he would trust their judgement.

We agreed to contact The School of Scottish Studies, meet them and work out the best way to move forward with the tapes.

And so it was time to travel to Edinburgh, to reunite Linda with her tapes, meet Cathlin Macaulay at The School of Scottish Studies and begin the journey to unlock the treasures of the tapes.

Please call or email with any enquiries

Taking The Tradition On Podcasts